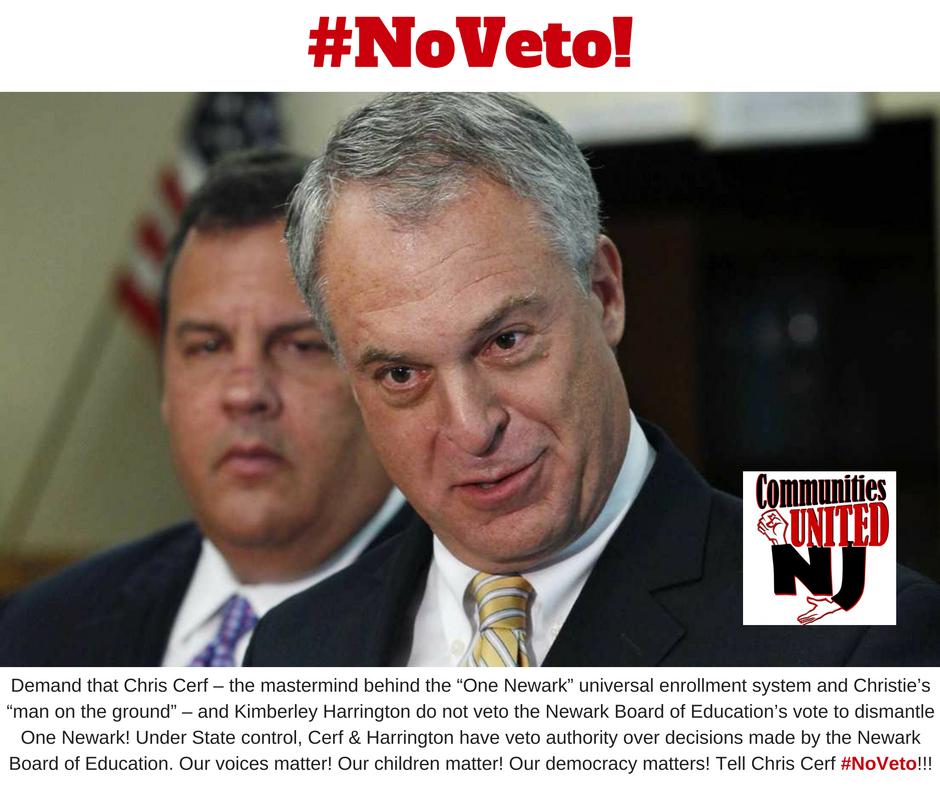 OUR ELECTED SCHOOL BOARD VOTED TO DISMANTLE THE “ONE NEWARK” ENROLLMENT PROGRAM! SHOW YOUR SUPPORT!

After several public meetings and several Board votes, the voices of Newark parents and students have been heard!  Even though the Newark Public Schools system remains under Chris Christie’s control, our democratically-elected members of the NPS Board of Education courageously challenged Christie (and his hand-picked Superintendent Chris Cerf) by voting 7-to-2 to dismantle the disastrous “One Newark” universal enrollment system! (The two dissenting votes were cast by “Unity Slate” members, Kim Gaddy & Tave Padilla.) NJ Communities United commends the courageous action of the seven elected school board members who directly challenged Chris Christie’s corporate takeover of OUR schools! THANK YOU to Chairperson Antoinette Baskerville-Richardson, and Board members Crystal C. Fonseca, Dashay Carter, Donald G. Jackson, Jr., Marques-Aquil Lewis, Leah Owens, Philip C. Seelinger, Jr., and Student Member Laura D. Gould!

OUR FIGHT IS NOT YET OVER!

The “One Newark” universal enrollment system has been a nightmare for parents who simply want their children to attend schools in their public neighborhoods, but were instead forced to send their children to schools far outside of the communities where they lived. Children in the same family were assigned to different schools in different communities across Newark. The logistical challenges created by the “One Newark” enrollment program has been a nightmare for working parents!

But let’s cut to the chase, at the core of the One Newark enrollment system – designed by Chris Cerf – is a “secret algorithm” used to assign children to schools. This “secret algorithm” funnels students into corporate charter schools, while under-enrolling our traditional public schools. The enrollment system was a boon for Wall Street-backed charter schools, all while draining critical resources from public schools – many of which were forced to cut critical wrap-around programs, sports programs and forego replacing the toxic lead pipes found in schools across Newark.

NJ Communities United and our community partners will fight to protect the decisions of OUR democratically-elected school board members! We will organize, we will mobilize and we will defend our democracy and our public schools from Chris Christie, Chris Cerf, Kimberley Harrington and their Wall Street Charter School Cartel masters!